Yes Virginia, There is Justice in the World 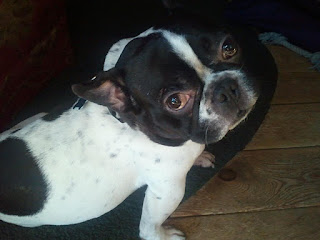 Perhaps one of the greatest gifts I received this Holiday season was a letter I received from the twelve-year-old daughter of a friend. This little girl, Emma, is unbelievably bright and has had to grow up fast, losing her father Scott, our friend, at only five years old. Her mother Denise has done a beautiful job of raising her, and this letter she sent shows how thoughtful and articulate she is. Her words have given me the push I needed to trudge into year three of this ridiculous fight for our Stitch.

Dear Hollye,
I was given a project by my Leadership teacher to write a letter to someone I admire and who I believe possesses courage. I immediately thought of you.
My mom told me the unbelievable fight you have been going through for over three years since you adopted your family dog Stitch….and the lawsuit against you demanding the dog back, asking over $25,000 for the dog they neglected.
Instead of returning Stitch to this horrible person, you chose to fight to keep this little dog that had become part of your family. You could have given Stitch to them and avoided the harassment, police and lawsuit, but you stood courageously beside your furry family member and became his voice.
My mom told me that your legal bills are very expensive and that you have had to have fundraisers, turn to your family and friends for help, set up an online store, and most recently have a garage sale to raise money for Stitch’s defense.
The saddest part is that you lost the trial because the judge decided that Stitch is property, like a bicycle, and had to be returned to the original owner. I think comparing an animal to a bike is just disgusting!
After all this, you could have thrown your hands up in the air and walked away. But you didn’t! You chose to fight for what is right for Stitch, no matter how much time or money it takes. To me, that is the definition of courage – having the mental and physical strength to fight for what is right and not just throw in the towel.
I will keep my fingers crossed and pray you win the appeal to keep Stitch. I will also continue to tell your story. I hope Stitch’s story will inspire others to have courage in life, find strength, and FIGHT ON!
I have three questions for you: (1) Where do you find the courage to keep fighting for Stitch, after everything that has happened?  (2) What is your definition of courage?  (3) Lastly, who do you admire most for their courage?
Thanks for being a leader and answering my letter!
Sincerely,
Emma
Darling Emma,
In the beginning of this case, I was encouraged by friends and family to fight for Stitch. Everyone, including my attorney, thought that ours was a slam dunk case that would never make it to trial. The judge would take one look at the ridiculous charges against us and throw it out. An abandoned and neglected dog who was adopted by a loving family would surely stay with the loving family, right? But that’s when we found out that life isn’t always fair.
After a grueling trial, over $10,000, and a year of fighting, we lost and were told to turn Stitch over to the plaintiff (who, incidentally never proved ownership). My friends tearfully advised me to let go at that point. We had been through so much stress, money, tears, they didn’t want to see us get hurt any more.
Our attorney said we could appeal, but even she, an animal rights advocate, wouldn’t blame us if we didn’t. Troy and I talked this over for days. We had always been law- abiding citizens, but sometimes laws are wrong. Slavery used to be legal. Not long ago, women weren’t allowed to vote or own property. And then there were Jim Crow laws, Prop 8…The only way to change things is to rise up and fight injustice. Troy and I wanted to face ourselves in the mirror every day without regrets. Turning Stitch over would have left us feeling cowardly and disheartened. So we decided to fight on.
We took the first steps into this appeal not knowing if anyone would have our backs, but thankfully, many have. Some have helped with money, some have offered kindness and encouragement, and prayers, all which has strengthened us. And then we get a letter like this from you, dear Emma, that makes it all worth it.
My definition of courage is doing what you know is right, even when it scares you, standing up against a bully, speaking up when it’s unpopular. Courage is feeling the fear and walking through it.
Who do I admire for their courage? I would say Nelson Mandela demonstrated the greatest courage, standing up against racial apartheid, being imprisoned for it, never backing down from what he knew was right. He changed his country and affected the world.
We are in a fight against the Property Statute Law, which states that animals are property, with no regard for their treatment or care, or even their lives. It’s a huge battle that many animal rights advocates have been fighting for years and years. There is a very strong possibility that we will lose, but we are staying positive and focusing on the end result. If we win, it would be a great victory for animal rights advocates and pet owners everywhere.
Emma, your letter has given us tremendous encouragement, and by sharing it here, you will be helping to open others’ eyes to the importance of animal rights.
Thank you for being such a thoughtful and caring girl, and good luck on your project.
Love,
Hollye
* to read more and see how you can help our case: SAVE STITCH
Friend us on facebook at Stitchy the Wonder Dog
← Prev: Grace in Bethlehem Next: Aging is NOT for sissies →

A Lesson in Courage

The past several weeks, as my heart broke watching the news accounts of the Michael Brown, Tamir Rice, Eric Garner...