Yes Is the Word 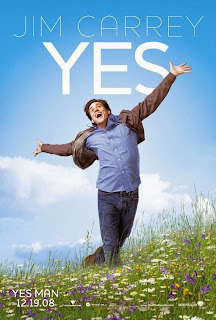 Years ago, my husband Troy (a professional musician/composer) took a comedy improv class. For him, it was like bungee jumping– saying yes to something that scared him. He ended up staying in the program and performing every Friday night for over a year, and sees it as one of the best things he ever did.
In improv, you always say yes to the scene. If your scene partner puts a leash on you and begins to parade you around the stage, then yes, you are a prize pooch in the Westminster Dog Show. Of course much of this is fun and games, but on a larger scale Troy learned how to say yes to life, rather than resist the “scenes” that were handed us. For instance, when we were in our forties with our daughter in college and son in high school, I sat Troy down and told him I was pregnant. He didn’t freak out (though it would have been justified). He said yes to that scene. All through my pregnancy with Evan, I attended Troy’s Friday night comedy performances. I loved it, and I too learned the importance of saying yes. A few years later when our son Taylor sat us down in the living room and told us his Japanese exchange-student girlfriend was pregnant, we said yes to that scene, too. And to many more scenes since…
One of my favorite comedies was “Yes Man” with Jim Carrey. In the film he is sort of a pessimistic curmudgeon who is challenged by a motivational speaker to say yes to every opportunity that comes his way. He begins to say yes to danger, risk, love and adventure. Of course a few things go haywire because he has no boundaries and doesn’t say no to the things he should. But by saying yes to opportunities he once hid from, his life opens up. He finds love. His career takes off. His friendships deepen. The deepest desires of his heart, ones he had not allowed himself to feel, begin to take root
This word yes is popping up for me a lot lately, and I am paying attention. Last week on Super Soul Sunday, Oprah was interviewing pastor Rob Bell (author of Love Wins).
“How do you define prayer?” she asked
“One word,” he said, “Yes.”  Bell says we should wake up every day and approach our lives with wonder. Greet the morning with, “Yes, I’m open. What’s next?”
Author Steven Pressman (The War of Art) also believes in the power of yes. He says that we all have two lives; the life we are living, and the unlived life. The only reason we have an unlived life is because we haven’t said yes to it.
Our friends Julie and Mary set a fine example. They have an engraved brass plaque on their front door which reads, “The House of Yes.” And these are two women who are definitely living the life of their dreams.
This morning in my meditation, I said yes. Yes. I’m open. What’s next? It feels both scary and exhilarating, but I am ready to step into the fullness of who I am, who I can be. I’m ready to stretch my limits and explore my potential. I am ready for new experiences and adventures. I am ready to approach my life with love and wonder.
YES.
← Prev: Reclaiming Joy IV: Standing in My Own Shoes Next: How to Push Through Resistance →