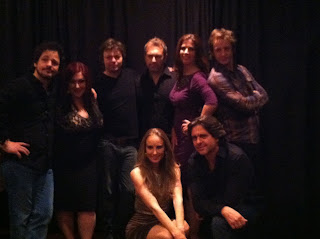 As many of you know, my husband Troy has been in the band Wilson Phillips for about 6 years, playing keyboards and guitar, touring around the country and the world with them (and I often tag along). Last night was one of their rare Los Angeles performances so we gathered a group of friends and family and headed off for the Canyon Club in Agoura Hills. I was looking forward to a great night, but what I didn’t know was how deeply meaningful and poignant it would be.
I felt incredibly lucky to witness a real magic between generations – a passing of the musical torch. First I witnessed it in my own family. Our two grown children Cristen and Taylor are both musicians and working in the music biz. Troy and I spent years as “band parents”, attending their shows, supporting their bands. But last night our kids got to see their Dad in his element. It was such a joy for me to watch them watching him, and the biggest thrill was to later see online how they had posted pictures of Troy on instagram with hashtags like #prouddaughter. Sigh…
If you aren’t familiar, Wilson Phillips is Carnie and Wendy Wilson and Chynna Phillips. Last year the girls had a big splash in the movie Bridesmaids, performing their hit song Hold On (the number one album of 1990, and the top selling female group of all time). They also recently released an album of covers of their parents music (the Beach Boys, and the Mamas and Papas).
Last night, as they performed the Mamas and Papas tune Dedicated, they brought Cass Elliot’s daughter Owen onstage to sing with them. When Owen let that voice of hers loose, it was as though Mama Cass was alive again and on the stage. The crowd went crazy. Even deeper was Michelle Phillips’ reaction, throwing her arms in the air and letting out a cry. It was such a moving experience to watch Michelle (the only surviving member of the Mamas and Papas) witnessing her and John Phillips’ daughter Chynna, and Mama Cass’ daughter Owen, bring their music alive again. I was choked up, and as I looked around the room I could see many others were, too.
But  the most emotional part of the evening for me was when the notoriously reclusive and troubled Brian Wilson showed up to watch his daughters perform – for the first time ever (a long complicated story). Carnie was nervous, not knowing if he would actually make it. I first spotted Brian, looking shy and overwhelmed, standing against a wall. He was seated with his wife and son in front of us, and I couldn’t take my eyes off him as he watched his daughters perform his songs. He was rapt the entire time, leaning forward, lazer focused on the girls as they performed those beautiful harmonies, parts he had arranged when he was so young. He looked mesmerized as Carnie sang lead on God Only Knows, then Wendy lead on Wouldn’t It Be Nice, and the three girls accapella on In My Room. I wondered what thoughts were going through his mind, what memories were conjured up. God only knows…
After the show I rushed backstage to tell Carnie and Wendy about Brian’s reaction, how he was so taken with them, so attentive to every musical moment. Their faces lit up, and Carnie’s eyes filled with tears. It was the first time, the FIRST TIME in twenty-three  years, that he had ever seen them perform. And they were carrying his torch…as Chynna carries John and Michelle’s, as Owen carries Cass Elliot’s, as our own kids carry music on in their lives.
Even writing this now I am overwhelmed with emotion.
The only thing that would have made the night better is if Tori Spelling ( who was there with her husband Dean Mc Dermott, Carnie’s team mate on the Food Network show Rachael Vs Guy) hadn’t talked LOUDLY all through the girls accapella version of You Won’t See Me Cry. But even then, I thought of Tori carrying her own father’s TV legacy forward, and I softened toward her.
Overall it was a night I’ll not forget, a night that gave me much to ponder, and a night that made me very, very proud to be Troy Dexter’s wife. As Taylor said on instagram, #DadkilledIt.

Owen Elliot joins Wilson Phillips to sing “Dedicated”. My hubby Troy on B3 keyboards behind Wendy.