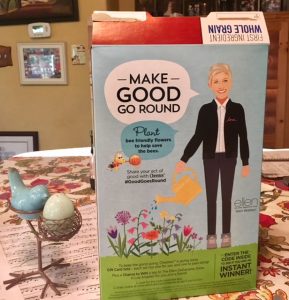 These days, I wake in the morning weary with sadness. The world, politics, fear for my country has worn me down. But then, this morning as my kid is eating breakfast, I see Ellen Degeneres on the back of his cereal box, and I feel hope. Ten years ago, we couldn’t even pass marriage equality in California – the most liberal state. Today it’s the law of the land, and Ellen Degeneres, an openly gay woman, is the ambassador for goodness on the back of my kid’s Honey Nut Cheerios.
I think about the fact that Barack Obama, already noted by historians as one of the best Presidents in American history, is of mixed race, and that inter-racial marriage was still illegal in many states when he was born.

I think about the fact that Oprah Winfrey, a black woman, is one of the richest, most influential people in the world, when all her grandmother had advised for her was to “find some nice white people to work for” — and that it’s an American colloquialism to describe an extremely wealthy person as having “Oprah money.” I think of her ancestors, women who were enslaved, raped, beaten, forced to work in the fields and do the work of ten men, and hope to god there is an afterlife because if there is they are surely smiling down with pride.

This American dream, to bring people from all over the world, from every culture, race, religion to live together as one democratic nation, is an experiment. It theorizes that every man and woman can achieve greatness, and that we are each only limited by the scope of our own dreams. It’s a messy experiment, and we have failed terribly on so many levels. But we’ve also made great progress, because today I’m looking at Ellen on a cereal box and smiling, and maybe even feeling a twinge of hope in spite of the news cycle.

I’m going to do my best today to feed the hope, and not the fear. I’m going to believe in us, in progress, in the best of America. I hope you will, too.
#KeepHopeAlive
#ThisTermShallPass

← Prev: Meeting my Muslim Neighbors Next: The Sound →