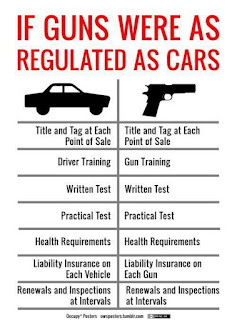 Fact:
Every day in America, thirty-three people are murdered with guns.
In Japan (where there are gun control laws) there were seven gun-related deaths in 2010. Seven. In a YEAR.
Here’s a quip floating around on bumper stickers (and facebook), “Guns don’t’ kill people. People kill people.”
Here’s a new bumper sticker: people with assault weapons mass murder people. No one stands a chance against a maniac with an assault rifle.
I have two thoughts on this whole thing. First of all, reinstate the ban on assault weapons. Why should it be legal in this country for citizens to out-gun the police? Doesn’t make any kind of sense.
Second, and this is a very simple thing- make it as difficult to get a weapon as it is to get a drivers license. A person who intends to buy a gun should have to take a course in gun safety, then take a test. If they don’t pass, just as we don’t get a license, they don’t get the gun. And as we have our eyes tested, they should have their sanity tested, and a doctors note stating that they are of sound mind wouldn’t hurt. They should then have their fingerprints registered and their picture taken, height, weight, color of eyes all on record, to obtain a gun license.
Nobody screams “socialism” about our process to obtain drivers licenses, or contracter’s licenses, or scuba certification or anything else, so is this really such an outrageous idea? No one is lobbying congress over standing in line at the DMV.
We’ve let the NRA run rampant with freedom for far too long, and look where it’s gotten us. We need to stand up and make our voices heard, so that our children can safely go to the movies, or go to meet a congresswoman without fear of being gunned down.
To sign the petition to reinstate a ban on assault weapons, click here.

← Prev: How To Be Happy (For No Good Reason) Next: Judge Judy goes to Yoga →

Why Women Will Lead the Way on Gun Reform

Huge thanks to my friend Brooke Elise Axtell for inviting me to write this piece for The Feminist Wire. This details...

“35 years ago, this could have been me.” These were President Obama’s words about Trayvon Martin in his...

I know you’re overwhelmed. Bad news is screaming at you every time you turn on the TV or radio. The gun violence...