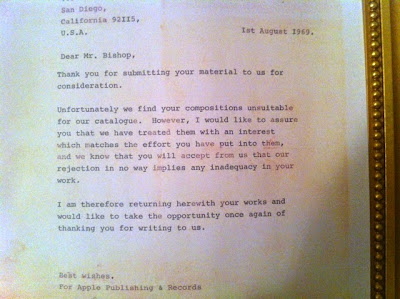 In Stephen Bishop’s guest bathroom, there is a framed rejection letter from Apple Records, saying that they found his compositions “unsuitable” for their catalog. 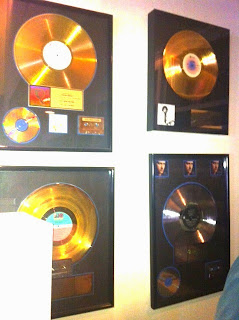 When you exit the bathroom and walk down the hall, however, you’ll see this — walls lined with gold records that followed in the years after that rejection letter, as well as Grammy nominations, and an Oscar nomination for his song Separate Lives (performed by Phil Collins). Stephen has performed on Saturday Night Live, the Midnight Special, and in concerts around the world. In addition to his own top hits with “On and On” and “Save it For A Rainy Day” (with Chaka Kahn) his songs have been performed by Phil Collins, Eric Clapton, Barbra Streisand, Art Garfunkel, Steve Perry, Stephanie Mills, Kenny Loggins, Johnny Mathis, Phoebe Snow, David Crosby, The Four Tops, and Pavarotti. Apparently, his music was more than suitable.
I love that he framed this rejection letter for all his guests to see. It made me want to do the same. Last week my book Fire Season received an ugly, negative review on Amazon. Inspired by Stephen,  I posted it on facebook for all to see. (Maybe I’ll frame it, too.) Having just been in Bish’s bathroom, I  decided to laugh these negative words off. Just because someone doesn’t understand your art, your music, your writing — doesn’t mean your work has no value.
When I first started sending Fire Season out, my own agent, at that time, passed on it. “It’s not a universal story. People won’t relate to it,” she said.
Another agent said, “No one reads memoir. Memoir doesn’t sell.”
A publisher said, “You’re not a celebrity, we can’t take a risk on it. Good luck, though.”
Just think, if every artist, writer, painter, poet, musician, inventor, comic, etc. listened to the voices of the “critics,” there would be no art in the world. No music. No books.
I believe every one of us should do our art, whatever form it takes. Write. Paint. Act. Invent. Brainstorm. Build. People will tell you it’s impractical, and a waste of money. People might think you are crazy, lazy, or irresponsible. You might even say these things to yourself (the inner critic is the worst). Do your art anyway. Do it, because it’s in you and no one else can do it like you can. Do it for no other reason than the joy of doing it. Do it, because in spite of the critics (who are most likely frustrated artists lashing out at others), the world needs your unique fingerprint.
Frame your rejections, and put them on the wall. I agree with Stephen, a bathroom is the most suitable place to hang it.
For Fun: Here are some rejection letters received by very famous, very successful artists: http://mentalfloss.com/article/55416/10-rejection-letters-sent-famous-people
Stephen Bishop is still writing amazing songs. Find them here: StephenBishop.com
← Prev: Love and Miracles Next: I'm Hitting The Road- and Might Be In Your Town! →

As most of you know, I have a new book out about how we lost everything in a fire. One of my favorite chapters in the...