Evan, 10 years old,  just started middle school. It’s been tough for him because he’s amongst the youngest and smallest in the school, and since most of his friends went to other schools, he doesn’t know many people. He’s been miserable since school began mid-August. But the one thing that has made him happy is watching the whole season of Stranger Things – twice. He became obsessed with the show, watching countless videos and vines, reading insider blogs watching all the interviews. He said he even liked it more than Star Wars.

So this September, since he was turning ELEVEN, my husband and I decided to give him a birthday party he’d never forget.

We downloaded the whole Stranger Things soundtrack and had it playing the whole night. After Stranger Things trivia and Demogorgon tag, we played a hot potato game to “Should I Stay Or Should I Go.” And after dark, we surprised the kids by taking them on a Barb hunt. We had turned our basement into The Upside Down, dark with vines and webs and everything covered in black and a bubble blower going under blacklights to give it that weird snowfall effect.  We brought the kids down there two at a time, while the scary “LIGHTS OUT” Demogorgon theme blasted. After walking through massive webs and putting their hands through Demogorgon goo (warm, mushy, overcooked spaghetti) they would eventually find a corpse covered in slugs and bugs, with oversized Barb glasses. Suddenly, Sheriff Hopper would jump out of the shadows with a flashlight under his face, warning them to never tell ANYONE what they’d seen, and the kids all went screaming up the stairwell.

All in all, it was a fantastic birthday party that Evan will never forget, but the part that made Evan the happiest? When Shannon Purser (Barb) tweeted it! 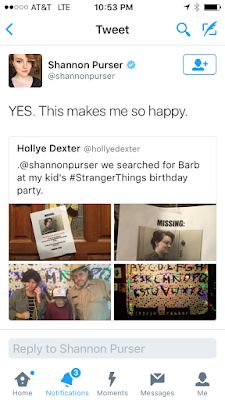 ← Prev: Writing About Family: Truth and Consequences Next: DARKNESS DEFINES THE LIGHT →

On Monday night,  when I spoke at my Uncle Dan Haggerty's memorial, I told a version of this story, which...