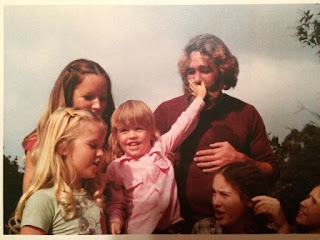 It is with a heavy heart that I tell you my uncle Dan Haggerty has died this morning. Cancer.
Fucking cancer.

You might remember him as Grizzly Adams, the character he portrayed back in the late ’70s, but to me he was the only stable father figure I ever had – the only one who stayed. As a child, I sometimes lived with my Aunt Diane and Uncle Dan, and spent countless weekends, Christmases and summers there. Uncle Dan’s world was filled with magic and art and jazz and unending possibility. He was an incredible artist, and would draw and paint mythical characters. He was an animal trainer, so there were often wolves in the backyard, an owl flying around inside the house, and for a while, a pet lion. His friends drove motorcycles and had long hair and tattoos and there was a never-ending cacophony of revving engines in the driveway. He was never happier than when he was at the Renaissance Faire. He and his friends would build a structure, dress in authentic costumes and embody their characters. It seemed to me that he wanted to actually live there, to stay in that time, because he was the true Renaissance man, born in the wrong era. He was the sun in the solar system of my family, around which the rest of us revolved. He is such a huge part of what formed me.

In the mid-80s, he struggled with addiction, and that was when I lost my magical uncle. His struggle changed him, and caused a rift between us that I was never able to heal. I saw him last year at my cousin Tammey’s funeral, and it was good. We reminisced about old times, and laughed. And cried.
I got the message late last night that he was dying. I couldn’t get it through my head. I kept thinking he’d rally and we’d all say, “Whew, That was a close one.” My uncle was always larger than life. He was invincible. Unbeatable. He had already survived drugs, a near-fatal motorcycle accident, and melanoma. I planned to see him this morning. I wanted to say goodbye. I lay awake at 5am, thinking about what I would say when I saw him: I would have told him that I loved him, and that I knew, I really knew, how much he loved me and my cousins. I would have told him that I knew his heart’s intent was good, and that he never meant to hurt anyone, even during the dark days when he had lost his way. I would have thanked him for the magic he brought to my childhood. And just as I was thinking that, my phone alerted me that I had a text from my aunt Diane. “He’s passed.”

I love the photo above of me, my mom, my brother Christopher, my cousin Tracey, and Uncle Dan. Uncle Dan had such a huge bright spirit, you could “feel” him enter a room before you saw him. All eyes were always drawn to him, but this was Christopher’s birthday party, and Christopher was clapping his hand over Uncle Dan’s mouth, basically saying, “Can it, dude. This is my day!” Uncle Dan laughed and laughed about that. We all did. There are many unresolved issues in my family, pangs of regret we all must carry, but this simple memory of a birthday party in the park, when we had no idea what lied ahead, and how we would be torn from each other …this was a good day. This is what I want to remember.

I have written so much about him, but never published, and I probably never will. But this is the end of an era, one that is almost impossible to capture in words but I worry that if I don’t write it down, it will fade away and it will be as if it never existed.

I loved him. I was angry at him for a long time, but I loved him. There is so much I want to say, so many unresolved feelings in my soul. I know I have a lot of work to do. I’m not ready to say good bye.

← Prev: How Americans Contribute to the Culture of Gun Violence Next: The Magic Hats →

The sound of motorcycles revving in the driveway meant that Uncle Dan was home, and with him came the...