(This was originally my private journal entry today – but I decided to out myself on the chance that some of you, maybe many of you, have felt the same.)

Today I feel like a failure. There. I said it.

The past couple weeks have been the worst: chock full of disappointments, rejection, disagreements. My career is flailing. Three big workshops I was supposed to teach were cancelled. I’m getting paid peanuts to write boring research articles that no one will ever read. My tax returns are an embarrassment to all tax returns. My little ones are fighting constantly and I’ve tried everything I know to stop it, but Friday ended in them injuring each other, and me crumpling to a heap and sobbing. (For the record, I don’t cry very often, so this is kind of a big deal.) And then I got on my damn knees and prayed. And cried. And prayed some more.
I feel like a complete failure in my career, an even bigger failure as a parent, and a general failure as a human.
One of my friends was shocked that I could be having a bad day. “Your life looks pretty great from what I see on facebook.” And to that friend I said, everyone has a bright and shiny life on facebook, because we post only the highlights. We don’t post things like “My kids are at each others throats and I can’t find any work and I haven’t made one dime on my book.”  Another friend said CHEER UP! which is the most invalidating thing you can say to a person who is hurting. Even during trying times we all have much to be grateful for – I absolutely know this. But it’s a challenge to enjoy the lovely weather while your ship is sinking. I need to acknowledge the fact that my ship is sinking. I have to figure out how to fix it, or jump out and learn how to swim.
Over the weekend, bolstered by the kindness of friends and my husband, I pulled myself up by my proverbial bootstraps and by Monday I was ready to take on the week. And then wham-o. At 8am, major rejection from an agent who had read my full manuscript. And it was a nice, thoughtful response. She loved my writing, said the part about us being trapped in the burning house had her on the edge of her seat and near tears. She liked the drama and the dark parts. But some of the other parts she found “banal”. I’m sorry, she said, I’m sure that time in your life didn’t feel banal to you.
It’s been running through my head ever since. It’s not just my book she’s talking about. It’s my LIFE.
Here’s how Websters Dictionary defines it.
Banal: So lacking in originality as to be obvious and boring.
Synonyms: trite – commonplace – hackneyed – trivial – platitudinous
I know, I know…She’s just one person. That’s just one opinion. J.D. Salinger got rejection letters, too. And it shouldn’t bother me but it does. You put years into a book, you put your heart out there, completely vulnerable, and it’s hard. I had pain in my stomach all day yesterday, as if I’d actually been kicked in the gut.
But listen – this blog is not a pity party. I’m not posting it so everyone will say “You’re not a failure!” This is a moment in my life – a shitty moment – but a moment nonetheless. I don’t intend to stay stuck here, but I’m giving myself a minute to grieve over dreams not panning out, the powerlessness I feel, my inability to find work, getting older, the fear that I’ll never amount to anything, the worry over my kids. That’s all real stuff. I can’t change it if I don’t acknowledge it.
I also know that this feeling is just part of being human. Everyone has failed. Everyone has felt terrible about themselves at some point. It’s what you do after you’ve failed that makes or breaks you. I could throw in the towel. I’ve done that before. Or I could decide not to give up, like these people did. 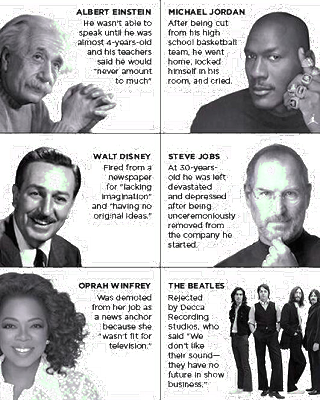 Here is what author Kathryn Stockett has to say about rejection:
“I received 60 rejections for The Help. But letter number 61 was the one that accepted me. After my five years of writing and three and a half years of rejection, an agent named Susan Ramer took pity on me. What if I had given up at 15? Or 40? Or even 60? The point is, I can’t tell you how to succeed. But I can tell you how not to: Give in to the shame of being rejected and put your manuscript—or painting, song, voice, dance moves, [insert passion here]—in the coffin that is your bedside drawer and close it for good. I guarantee you that it won’t take you anywhere.”
So I’ll keep sending my book out until I find the agent/publisher/editor who gets it because I know there are people who will find hope in my book- and hope is a much needed commodity in this world. And I’ll write these cheap research articles until something better comes along. And I’ll try each day to be the best parent I can be even when it doesn’t seem to be working.
Susan Sarandon said that every time she faces rejection, she celebrates because she knows she is being moved closer to what is right for her. I don’t know if I’m that evolved, but hell, I like champagne.
Onward…
← Prev: "35 Years Ago, It Could Have Been Me" Next: You are Rich- and Here's Why →