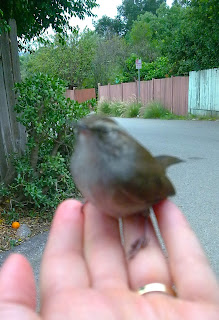 Let me preface this story by explaining my history with finches. Ever since I can remember, whenever things became hopeless in my life, finches would appear out of nowhere. Suddenly the trees and bushes around me would fill with them, coming alive with their birdsong. Even if I were indoors, I’d see them in the trees outside my window, and I’d know, somehow, that everything was going to be okay. In 2004, during a particularly rough holiday season after becoming estranged from my family, Troy surprised me on Christmas morning with a beautiful birdcage filled with finches, and a wooden sign he had made that said HOPE. Little did I know that Christmas I was pregnant with Evan.
I am reluctant to admit I’ve not had much holiday spirit this year, which is not like me. I’m born in December, named after Holly. I’ve always been the embodiment of Christmas spirit. But not this year. I’ve gone through the motions, decorating the house, playing Christmas music, taking Evan to Candy Cane Lane, but I’ve had a raincloud following me. A couple weeks ago I extended an olive branch to my family, only to have it metaphorically slapped from my hand. But larger than that is the fact that it has been a year since I’ve seen my grandson Ayumu. I unpacked the Christmas decorations to find pictures of him with Santa, his ornaments, his stocking.
There is a hole in my heart the size and shape of him. A simple Christmas carol on the radio can make me have to pull my car over until the tears pass. My friend Julie said, when you lose someone, the hole never gets smaller. Your life just gets bigger around it. I try to build my life around the hole, but at Christmas time it feels so enormous it threatens to swallow me.
I didn’t think anything could touch that place inside me.
But Tuesday night, I came across a box of memories- my Cristen and Taylor when they were so small. It was 1995, the year after we’d lost everything in the fire, but we looked so happy. We had endured so much grief, and yet there was this strong love that couldn’t be broken. Looking at our faces pressed close together, the joy in our eyes, I realized that even though there are fractures in my family, and problems that seem to have no solutions, it’s all part of the beautiful mess that is life. Just as love pulled us through back then, it will pull us through again. Like the finches always remind me- everything will be okay. I went to bed happier that night.
In the morning I met a friend for coffee. Anna is the mom of two small children, and has spent the past year battling cancer. As we talked about life and loss and surviving the dark night of the soul, her little boy Andrew- a beautiful 18 month old half-asian boy, reached his arms up to me to be held, just as Ayumu always did. He climbed up in my lap and leaned back into me, lounging comfortably as he drank from his sippy cup. He put his little arms around my neck. He rested his head on my shoulder. He blew me kisses and gave me hugs. And suddenly, the vacant space I thought was unreachable was not empty. It was filling with love again. I left our meeting overcome with happy tears, so grateful for the gift that little angel boy gave me.
I called to tell Troy about it. “It was a tiny miracle,” I said, “and I just want you to know- your wife is happy again.”
Just after, I was driving to yoga, when suddenly something flashed across my rearview mirror. Something was inside my car. I slowed, looking behind me, when suddenly there was a blur in front of my face. I slammed on the brakes and as the car jerked to a stop, a finch perched next to my steering wheel, his little eyes like two shiny beads staring into mine. He sat, calmly looking at me, as I caught my breath.
I don’t know how he got inside my car. All my windows were up- it was cold outside.  My first thought was that he must have somehow gotten trapped and was frightened, so I rolled the window down to let him fly out. But he didn’t budge.
I slowly extended my hand to shoo him, but still, he didn’t fly away. Instead he let me scoop him up and hold him. I put my hand outside the car window to set him free, but he stayed put. He sat in the palm of my hand, looking at me, and that’s when I got it, and the tears started again. “Everything is going to be okay.”  I thanked him for bringing hope to my heart, and said a prayer of gratitude. He stayed with me for several more minutes, and then he flew away.
I sat unmoving in my car, letting myself feel it. I texted a picture of my little feathered angel to Troy. He wrote back, “But…how did that happen?”
There may be a million logical explanations for how it happened, and maybe it can all be explained away, but I know how it felt in my heart. I know what I felt was real.
I responded, “It was a tiny miracle.” 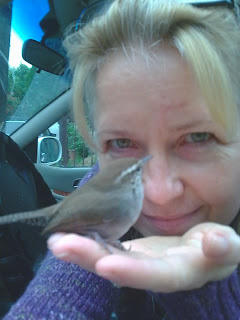 ← Prev: Good News- the world is NOT ending! Next: A Single Bullet →

After I was fired last June from Moms Demand Action, I began to pray and envision every day that I would one day work...

Dreams are a Powerful Thing

Last night at the King Family Christmas party, our friend Wendy got up and told the story of her childhood...