The Stories I Don’t Tell 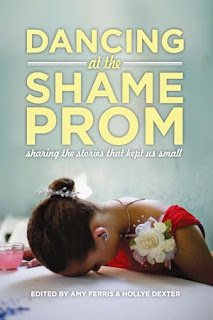 It’s funny that I’m co-editing a book on shame, because if you’d asked me a few years ago, I’d have said I was a shameless woman. What I mean by that is I don’t have a lot of regret. I made some mistakes when I was young, but that’s what youth is for. I feel good about my life in general. And yet…
There were some things I just never talked about. That’s what interests me now: the things we don’t talk about. Shame is the part of your story that you don’t tell. You may not dwell on it, but it dwells in you.
For instance, all my life, I tried to push away from the truth of who I was and what I came from. In the Shame Prom, I write about the fact that I was an unwanted pregnancy, born to two juvenile delinquents. My father was in jail when I was born, and would end up spending my entire childhood in prison. My mother, a 16-year old rebel, became a single mom who worked nights in bars. We used food stamps to buy our groceries.
But I wanted to be a Brady Bunch kid. I was a cheerleader. I wore the right clothes. I got good grades. Not until the last several years, after I wrote my memoir, did I start talking about my history. In denying that part of my reality, I became a fractured woman plagued by anxiety attacks and fear. Once I finally claimed that part of my story, it no longer held power over me. It freed me in ways I couldn’t have imagined, and opened new doors in my life.
I remember when Rob Lowe’s big sex tape scandal broke in the 90’s. Soon after, he was on Saturday Night Live, poking fun at himself over it. He never made excuses or tried to hide it. Suddenly, no one cared anymore. He claimed his shame, and it no longer had power over him. Look at him now- successful career, happy marriage and family. When you claim your truth, you take away the blackmailer’s power. YOU hold the power.
So that’s what this Shame Prom movement is all about. So far our Shame Prom writers have turned in gorgeous essays about the stories they never told:
Elizabeth Geitz, an Episcopal Priest and leader of her community, reveals her shame over her mother’s suicide
Kristine Van Raden comes to terms with the mother-guilt of her daughter’s eating disorder, and her daughter, Kate, writes a companion piece
Laurenne Sala struggles with her teenage shame over her gay dad
Julie Silver recounts the day she was banished from her loving community, and how she found redemption
Robyn Hatcher tells a fascinating story about carrying the shame of her race
Rachel Kramer Bussell, an erotica writer who would appear to be shameless, tells her  secret – she is a hoarder
If you think you don’t carry any shame, ask yourself…are their parts of my story I leave out? Parts of my history I’d rather not talk about?
There are for me.
Everyone knows I’m married to a wonderful man for 22 years, but few people know I had a previous failed marriage.
And no one, I mean NO ONE knows what I am about to reveal to you now, for it is perhaps my greatest shame ever.
In 1982, I voted for Reagan. If you defriend me on facebook right now, I’ll understand. I just couldn’t hold it in any longer.
So friends, this is what our mission is about, and Amy and I want you join us. Let’s get it all out, free ourselves, connect with each other, support each other, celebrate all we have survived and the strong women and men we are.
Let’s move from Shame-full to Shame-less.
← Prev: The Messages Are Always There Next: Lessons Learned At A Funeral →

Letter to My Teenage Self

Dear Teen Self,Remember that muggy, summer afternoon when you and your friends sat in a circle on your bedroom floor,...