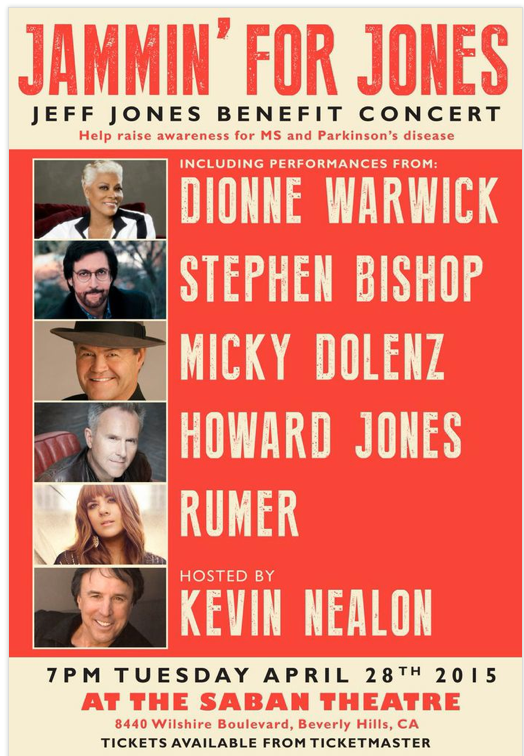 As most of you know, I have a new book out about how we lost everything in a fire. One of my favorite chapters in the book is called “The Harvest.” It’s about how, when we were broke and homeless, our community of musician friends rallied around us and put together a benefit concert to lift us back on our feet. Hundreds of people showed up. When music and love intersect, it is an unbeatable force. It lifted us up financially, yes, but more importantly, it lifted us spiritually. In what was the ultimate “trust-fall,” we were caught, and held up by hundreds of hands. We swore then that once we were stronger, we would return that kindness, with every opportunity we got.

This is why my husband Troy and I are so happy to be part of the Jammin’ for Jones band, raising money to lift our good friend Jeff back onto his feet. Jeff is an incredible singer/songwriter/musician. His songs have been covered by Stephen Bishop, Art Garfunkel, and the band Alabama, to name a few. Jeff is now suffering terribly with both MS and Parkinson’s. Jeff can no longer sing, which crushes my heart. I melt for his singing voice. Listen here:
Just before our house burned down in 1994, Troy and Jeff were part of Stephen Bishop’s band, and had just toured Japan together. All Jeff and Troy did on the road, aside from making great music, was laugh. At home after the tour, the good times continued. Jeff can tell a story like nobody’s business, and had us laughing in our living room until the wee hours of the morning. Jeff is a good man with a huge heart, and so is Stephen. (Stephen has shown up and donated performances for me on countless occasions- to support my work with foster kids.) Stephen and Jeff have shared a close friendship for over 40 years, and were even roommates for 16 years back in the day. It has deeply touched my heart to watch Stephen work so hard to put this benefit concert together to lift his best friend. He has also helped Jeff to release his first and only CD of his own. This is what true friendship looks like.
Stephen Bishop and Jeff Jones on the Midnight Special. I love the shots of their faces singing together. Jeff looks about 16 years old.
This benefit concert for Jeff is one of the greatest labors of love I’ve ever experienced. I so hope you will buy tickets to witness this special evening, and tribute to Jeff. Bring some Kleenex. If you’re sentimental like me, you’ll cry, in a good way.
Tickets start at $50 and all funds go to help Jeff with his medical expenses. Buy your tickets here fast – its going to sell out: http://www.ticketmaster.com/jammin…/event/0B004E57EE4E535E
If you can’t attend but would like to contribute to Jeff’s medical fund, please click here:
http://www.gofundme.com/JamminForJones
A few of the people who will be there on April 28 to pay tribute to Jeff: Kevin Nealon, Penny Marshall, Piers Morgan, LL Cool J.
Some of our show sponsors: Eric Clapton, Linda Rondstadt, Bette Midler, Art Garfunkel, Penny Marshall and more.

Video Tributes will be shown from: Michael Mc Donald, Jackson Browne, One Direction, and more…

← Prev: Hollye and Troy and The Seven Plagues Next: Love and Miracles →