So the L.A. Times has run an article on our Stitch story, and I have learned a huge lesson. When you open yourself to the press, you’re also open to the risk of things being misinterpreted – which can really hurt you-  and that is what happened here. While I understand that a journalist must present both sides of an issue, this journalist left out the most important parts of the story- the ones where Daveigh Chase locked Stitch in a room for days and eventually abandoned him, and where Soleil Brown admitted to losing him at least five times, didn’t go looking for him for days because he “figured he’d turn up”. Also the fact that Stitch was found in the middle of a highway, weak and sick, with a cigarette burn on his neck. Because she didn’t include those facts (all that were admitted in court- and I have numerous witnesses) it just looks like Brown is this poor guy whose dog was taken away. In the comments section of the story, we are being called “spiteful”, “selfish” and “disgusting”.
What this article neglects to mention is the reason we can’t turn Stitch over to Soleil Brown. I told this journalist, several times, I would never keep a dog away from an owner who loved and cared for him. That would be cruel. But we could not in good conscience, turn Stitch over into the hands of these people. In their care, he almost ended up dead.
Before we adopted Stitch in 2007, he had been passed around between a group of kids: Aaron Carter, Daveigh Chase, and Soleil Brown. This is a group of privileged Hollywood kids who spend their time partying and in nightclubs. Aaron Carter, who used to date Lindsay Lohan and has been in and out of rehab, was the original owner of Stitch, but he gave him away to Daveigh Chase, (the voice of Lilo in Lilo and Stitch, thus Stitch’s name). Daveigh was then a teenager, spending all her time in nightclubs. She locked Stitch in her room for days at a time without sunshine or exercise while she was out partying. Then she ran away from home at 16 with her adult boyfriend, Soleil Brown, abandoning Stitch. This is why her mother was looking for someone to adopt Stitch. Any of this can be googled. There is a paparazzi video of Daveigh saying Stitch is her dog. (google “Daveigh Chase is adopting a puppy”)  If you want to see pictures of Daviegh Chase guzzling tequila straight out of a bottle and various other nasty things, just check out her tumblr page (Daveigh Chase in your face). Or Soleil Brown’s online profile where his About Me sections says that he “hates everyone this good world has to offer”. These are the people who passed Stitch around like he was a toy. Daveigh’s mother told us that Stitch had been taken to wild parties where he was so distressed he jumped through a window and ran away.
After we adopted Stitch and had him licensed and microchipped, Brown falsely claimed the dog was his (because Daveigh was a minor and had no recourse) and filed a theft report against us with the police department, and although he had no proof or documentation that Stitch belonged to him, we were forced to return Stitch to Cathy Chase (Daveigh’s mother). Two years later, Stitch was found abandoned in the middle of a highway, sick, and with a cigarette burn on his neck. Because he was still microchipped to us and had no current tag, we were contacted. We made a ten hour trip to rescue him for a second time.
Brown didn’t put missing signs up for Stitch until eleven days after he went missing. I believe this is because Brown lives in Hawaii, and only comes to L.A. for some months out of the year. My question is – how can he own a dog in California, when he LIVES IN HAWAII?
I wondered if, when we went to court, we would learn something about Brown – that maybe we’d find out we were wrong, and he really was a good guy who loved Stitch. But that didn’t happen. Brown admitted in court that he had lost Stitch at least five times, that he let Stitch, a small French bulldog, run loose daily in the wilderness in Tahoe, where there are coyotes and bears. Even after losing Stitch numerous times, he never gave him a proper tag, never licensed nor microchipped him. Do those sound like the actions of someone who “loves their dog like a child”?  If a parent had “lost” a child five times, CPS would take the child away.
And in response to Brown’s former attorney JT Fox (in the article) saying he loved the dog? JT Fox dropped Brown as a client. I was there when he went to court to ask the judge to release him from the case. He told my attorney that Brown was an idiot who didn’t care about the dog. This whole thing was only about money. Brown was originally suing us in unlimited court for up to $50,000.
Again, everything we’ve done in this case has been what we believe is Stitch’s best interest. Stitch has lived with us for years, where he is safe and loved and has never once tried to run away. For those who have called us selfish and disgusting, I can only say this. We have spent thousands and thousands of dollars, and endured years of grief over this. Would a selfish person do that? We are doing what we believe is right, whether the court agrees or not. We aren’t concerned with anyone’s judgment. We only want to do what is right. Stitch deserves to live a happy and safe life. 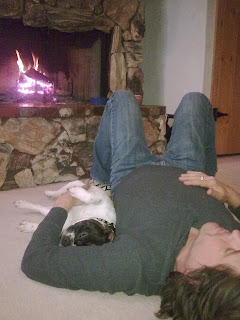 AUGUST 2013 UPDATE: It has been a year since I posted this blog, a year since our appeals were thrown out of court, 2 years since the plaintiff “won” custody of Stitch. He has not once tried to contact us or our attorney to retain custody. I think at this point, any judge in his or her right mind could plainly see that this never was about Stitch. It always was about money.
← Prev: Navigating Disaster Next: My Sideways Anniversary in Wine Country. →

Here we are, at what we believe will be our final ruling in appeals court (but who knows with this case) in our fight...