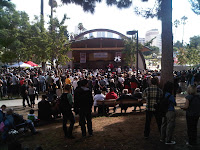 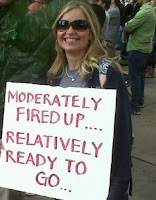 I had a great time at the Los Angeles Rally for Sanity yesterday. What I am most happy about is not only the huge turn out in D.C. (CBS estimates 215,000) but the many satellite rallies like ours in Los Angeles, and all over the world! I wonder if all those crowds were tallied, what the grand total would come to? From Alaska to Hawaii, Texas to Minnesota, Illinois, New York all the way to France! ALL OVER THE WORLD! (See http://rallymao.com/ to see all the Sanity rallies that took place yesterday). Pretty cool, huh? It just goes to show you…we are not discouraged and apathetic as the polls and pundits would have you believe. We do care about our country, we will show up and vote. Maybe we aren’t loud and nutballs about it – but we care.
There was a wonderful smattering of unusual characters at the L.A. rally (well it is L.A.) which made it fun. 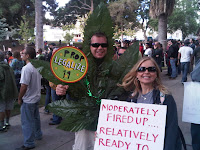 (I mean, really. Where else can you hang out with a guy dressed as a giant pot leaf?)
But overall, it was filled with calm, rational citizens showing up to support sane politics. Here we were in MacArthur park, which was sort of known to be a tough neighborhood, all walks of life, young and tattooed, old and gray-haired, families with kids running around (like us) watching the D.C. Rally on a Jumbotron Screen together, cheering along.

I saw only two parked cop cars- no police anywhere. It wasn’t necessary. There were a lot of people picking up trash, just to be helpful. It was feel-good day. No anger, no shouting, no hateful racist signs. I think bringing humor and levity to our political situation is the most healing thing we could have done at this point. Laughter is good medicine for what ails us as a country. I love that we are taking politics back with good humor. Hooray for us! 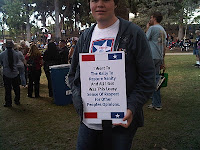 After the Jon Stewart rally ended on the Jumbotron, the crowd thinned out. There was an after-show featuring a flash mob in Halloween costumes doing Thriller (totally cool!) then some L.A. stand up comics, some of them worked blue, and that was uncool. We were in a park in the middle of the day with tons of kids running around, not at the Comedy Store in Hollywood. There was one wingnut in the crowd with a sign about how everyone was going to burn in Hell, or some such thing, and one comic went after him in a really ugly way, and that was NOT what our day was about. Extremism in any form is wrong. That’s my one criticism of the day. (But our rally was organized by an individual organization not affiliated with Jon Stewart.) Other than that it was a great day and I was really proud to be part of it with my family and friends. 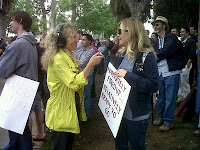 (Being interviewed for KCRW – the Warren Ulne Show. You know me…I always have something to say)
Now if we all show up and VOTE on Tuesday, then maybe we won’t have any kooky tea-party candidates in Congress, and we can all (Democrats AND Republicans) breathe a sigh of relief.
← Prev: What You Didn't See on the News... Next: Goodbye Friend. →

Peaceful politics: What do you stand FOR?

It’s been said that when Mother Theresa was asked if she would join an Anti-War march, she said, “No. But when you...

It's election time, everybody, and you know what that means. The politicians and media are going to pump you full of...

Michelle Obama- ten feet away from me!With all the unpleasant things going on this week, I haven’t had a chance to...