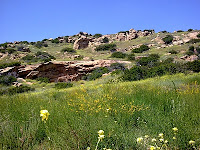 Strangely, it feels like Spring this November. The Sun is shining bright in California, and the fields outside my house are green, alive with flowers. Even though it’s oddly unseasonal, I’m grateful for the respite.
I feel the fog lifting from my life, I think, I hope…All this year, we’ve been dog paddling just to stay above water, as life continued to throw us one curve ball after the next. Well, it was more extreme than curve balls…it would be more accurate to say we’ve been dodging bullets.
But now I am exhaling…I feel the change happening. I believe the storm is over for now, and I’m ready to rebuild. As I am walking through the tattered emotional wasteland of my life taking inventory, one of the things that got hit hardest was probably my faith. Faith in what?
Exactly.
I’ve just been trying to survive. No time for contemplating, musing. No time for meditation and centering, although it’s what I needed most. Yes- there were some frantic prayers bandied about…to the great unknown. And at times I felt I was being looked out for. By who? I don’t pretend to know.
But now…I miss that part of myself. The part who is hopeful and optimistic. The part who believes that there is a benevolent reason for all the things we survive.
I have no idea what I believe or how to get back to that girl I was before everything got so crazy. But I think prayer is a good start. Prayer to who? To what? I have no idea, but I’ll just throw it out there and see what happens…
← Prev: Goodbye Friend. Next: Life Lessons Learned at Lowe's →

-->"We can not solve our problems with the same level of thinking that created them"-Albert EinsteinFor...

What I’m Giving Up

When I feel stuck in life, sometimes the simple act of letting go of old things, cleaning out a desk drawer, my...

A few people have written to ask why I haven’t been blogging much lately, and the simple, wonderful answer is –...