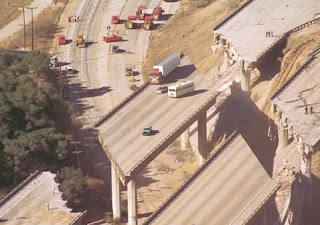 My friend Pam reminded me this morning that today is the 18 year anniversary of the 1994 Northridge earthquake in Southern California. It’s amazing how time can put the fuzzy technicolor edges on a life-altering disaster, but writing brings it into clear focus again. I had just been writing about the earthquake in the book I’m working on now, which is about our home and life burning down that same year.  Here is an excerpt:

I found Troy in the hallway, shining a flashlight on the breaker box, the smoke swirling in its beam. When he flipped the override switch, it made a loud buzzing sound.
He jumped back, “What the hell…”
“Honey, please. Don’t mess with it,” I warned.
He stepped back closer to inspect, rubbing his eyes from the sting of the smoke, “It’s gotta be just a fuse…I can fix it.”
“Please! I have a bad feeling. Let’s just leave it and call an electrician in the morning.”
“Okay, okay.”
Cold air blew in from the cracked windows. I wrapped my arms around myself, shivering. “This day is really freaking me out.”
“Sweetie,” he put his arm around me, “everything is okay. Don’t worry.” His touch was warm, his voice soothing, but it did not calm me.

I went upstairs, sat on our bed and attempted to meditate. My mind prattled on with possibilities to rationalize my behavior. That January, in the middle of the night, we had experienced a terrifying earthquake that devastated California and killed 55 people. We had awoken to what sounded like the end of the world. The earth let out a deafening roar as power lines outside snapped and blew up. Our house shook with such violent force we thought we had been bombed.


Fires erupted all over Los Angeles. Water mains broke and flooded the streets. Buildings flattened like pancakes, freeways snapped in half like legos. California was shut down, we had no power and no way to ship merchandise as freeways had crumbled. It almost put my children’s clothing company out of business.


It took us quite a while to bounce back from that loss, and for all four of us to be able to sleep through the night again. Strong aftershocks continued to rock California all year. Many of us had become attuned to the signs and, like animals, we could feel the shifts in weather, the particular stillness in the air. Maybe I was feeling the onset of another aftershock. Or maybe what I was feeling was an emotional aftershock. Or maybe it was my childhood issues rising up to haunt me again. What was wrong with me?

Megan had slept over the night of the 1994 earthquake. As the house shook violently, Troy and I ran for the kids, bouncing against the walls as we made our way down the hallway.  I’d grabbed Cristen and Megan and Troy swooped up Taylor. I held the girls tight in my lap until the shaking stopped. Megan, only six years old, was so terrified she peed on me. We then ran outside and were huddled in the street with our neighbors, everyone wrapped in blankets, when Brian and Johanna’s truck pulled to a screeching stop. I’ll never forget the look of terror on Brian’s face as he ran toward us, and how it turned to relief when he saw his little girl wrapped in my arms.  He knew we loved Megan as much as one of our own, and we’d never let anything happen to her. We all hugged each other so tight,  crying and thanking God that night.


Were you in Los Angeles for the 1994 earthquake? What are your memories?

The page you requested could not be found. Try refining your search, or use the navigation above to locate the post.