Reclaiming Joy IV: Standing in My Own Shoes 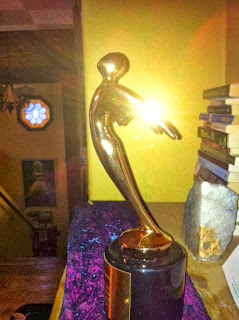 Recently while hiking in the mountains, my friend Terrah and I sat on a rock in the middle of a silent canyon and had a long talk. Both of us had gotten to a “stuck” place in life, and we wanted to bust out. I was telling her about a book I’d been reading (E Squared) where author Pam Groust likens life to a skyscraper. Most of us, she says, are living on the second floor, while everything we desire is on the 17th. But we’ve never seen the 17th floor, therefore we don’t believe it exists. We also don’t see electricity, but we don’t hesitate to turn on a light. We believe the light will be there, and it is. So, I was telling Terrah, I have to get to the 17th floor.
“It’s not about getting to the 17th floor,” Terrah said, “it’s about living there.” She explained to me that she teaches her acting students to “inhabit” the person they want to be in ten years –walk as that person, talk as that person, LIVE as that person.  I was mesmerized- what a concept.
Later I talked with Troy about this. We’ve been hit with some pretty big financial setbacks this year, and it’s had us feeling beat down and defeated. So I told him what Terrah had to say about it, “How about we start inhabiting the selves we want to be, right now? How about we live on the 17th floor?”
He said he loved it, and talked about who he wanted to be in the future.
I said, “I think who you are now is pretty great.”
He said, “The guy I want to be is not worried about money, spending all day writing a song about a hayride.” And this goes to show you, it’s all in one’s perspective. I saw him as a success and he was feeling like a failure.
“But…the way I see it, you are greatly successful!”
“Tell that to the mortgage company,” he said.
“But you write music that educates children, and helps autistic kids. You just played a Wilson Phillips gig in front of 8000 people and opened for Brian freeking Wilson. Why not inhabit the person you are now?”
And of course he very sweetly pointed out that I could take my own advice.
Ultimately we decided that while striving to inhabit our better ourselves, we would be happy for what we’ve been able to accomplish so far in our lives, and stand solid in our own shoes.
I mean, if you really stop to think about it, just look at the things we’ve all accomplished in our lives. You, me, all of us. So many of us have raised kids, taken care of a sick friend, survived cancer, built a successful career, traveled, rescued an animal, been courageous beyond our wild imaginings…We are teachers, friends, mentors, activists. Why don’t we give ourselves credit? Why don’t we stand tall in our own shoes instead of wishing we were in someone else’s? I think change comes when we take note of the things we’ve done,  reminding ourselves daily that we are better than we know. Rather than ignore our past successes, we can use them as touchstones to build future success.
So Troy had a gig in Vegas over the weekend. I tagged along with Evan and Ayumu and we made a crazy road trip out of it. We kept ourselves in a good mental space all weekend, and in spite of a few colossal challenges, we stood steady in our own shoes. We walked a little taller and felt a lot stronger. And when we got home late Sunday night, there was a box on the porch. We rushed inside to open it were shocked to find that Troy had won an award (proving my point that who he is now is indeed pretty great- thank you very much.)
It was a Telly Award for his compositions on the ABCMouse website. (Other recipients have included ESPN, OWN, Discovery Channel and many more.) This came completely out of left field. We didn’t even know he was in the running.
But this is the beauty of claiming who you are. Troy stood tall in his own shoes and the Universe met him there. I am ridiculously proud of him. For starters, I’m going to send this picture to the mortgage company. 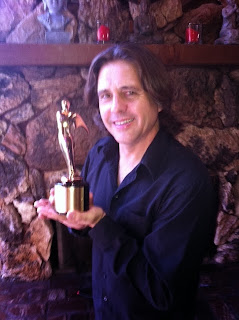 Troy Dexter: “Award-winning composer”  Yay!
*And thanks to Terrah Bennett Smith for starting a great conversation that had a domino effect…
← Prev: Reclaiming Joy III: Gratitude Next: Yes Is the Word →