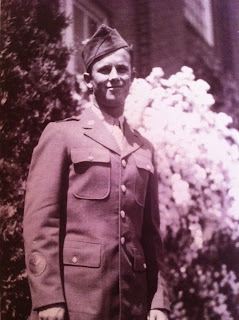 This is a photo of my grandfather Ben – a young man heading off to war. After World War II, Ben became an alcoholic, prone to fits of rage and violence that destroyed his family. Ben had always wanted to be a writer, but his life turned out very differently. Sometimes I think it’s part of my inheritance that I pick up the loose threads and carry on –  maybe that’s why I feel compelled to write.

Here is a poem Ben wrote in his later years:

So he hides it inside him where no one can see,
Cries in secret whenever he can,
For his parents have shouted, “Don’t you dare shame me!”
“Stand up! Don’t be soft! Be a man!”

Then he’s told to follow that horrible star
Brutish God of gross barbarism
“Take up your weapons and be off to war!”
For scheming and false patriotism.

Those frightened young boys who march away
To send other young boys to their grave,
Who go off to kill or be killed in the fray,
For they’re boys and must always be brave

Will justify their meaningless death
to themselves by being so brave,
As they senselessly die, give up their last breath,
the most precious of gifts that God gave.