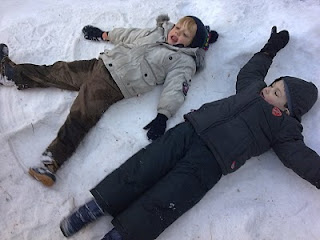 (is there anything sweeter than babies making snow angels?)

The other day in my writing group, a woman in her mid seventies read a story of her childhood, a vivid memory she had of being three years old, sneaking into the kitchen to steal a swig of castor oil of all things. Her father caught her and whipped her with a belt. She recalled his fury, said she had never seen him that way before as he had always been at a cool distant remove. She was still exploring that childhood experience in therapy. Still. Did I mention she was in her SEVENTIES?

After her reading, we all gave our feedback. I told her that I was pulled out of the story by the intense reaction of her father, with seemingly no reason.

“First of all,” I said, “why on Earth would you be sneaking castor oil (anemia, she imagined) and why would your father be in such a rage over it?”

She couldn’t say. Only knew that he was crazy mad.

“Well…it still doesn’t make sense. Was this the forty seventh time you snuck out of bed, waking your parents by knocking things over in the cupboards and making a mess of the kitchen, because if it was that, I can understand that kind of crazy. I have three kids, the youngest is four years old. I KNOW crazy.”

She hadn’t thought about that, she said. She simply couldn’t remember the reasons. It was only one incident, and it completely formed the way she would choose dysfunctional relationships for the rest of her life.

Oh great, I thought. That’s all she remembers in her mid seventies ….one episode of her father’s rage and she’s still in therapy over it. I’m doomed.

I can’t count the number of times I’ve been crazy mad at my four-year-old son, and banished him to his room “Where the Wild Things Are”– style. It’s for his own well being, I assure you (maybe more for mine). When he’s been torturing the dog all day, chasing the cats, jumping off furniture…I count to ten and breathe, breathe….But when he puts himself or others at risk (my poor, long-suffering cat), that’s when I lose it and turn into a red-faced crazy screaming person.

I drove home from writing group and sobbed to my husband. “I’m a terrible mother! All Evan will remember when he’s seventy years old is me screaming at him yesterday and sending him to his room.” My husband laughed. “Are you kidding me? You love that kid to the moon! Every day I watch him run to your open arms. You read him stories, play games with him. That’s what he’ll remember.”

It’s true. Ninety-five percent of the time I love my kids ferociously. Five percent…well. And I’m sure the feeling is mutual.

Luckily I have two grown children that have already survived growing up with me. My perfect focus group…

I asked my nineteen-year-old son, “What are your memories of being really little – like Evan’s age?”

Nothing really, he said.

Okay, he’s a man of few words, always has been. So I pulled my twenty-four-year old daughter into the conversation. I asked them both to recount all their early childhood memories.

And do you know what they told me? They couldn’t really remember ANYTHING from being that little. Neither of them!

Ingrates! When I think of all the time I spent meticulously planning themed birthday parties and Christmas morning reveals….and they remember nothing?

“You don’t remember your birthday parties?”

“Christmas mornings…when Santa busted his ass building you…er, I mean delivering that pink and white playhouse in the backyard?”

So I decided to get creative.

“Do you remember the pony we bought you on your third birthday?”

My daughter looked at me suspiciously.

She rolled her eyes at me and started to leave the room.

“Wait!” I called after her. “For real…Do you remember me being mad at you when you were little?”

“Well, I just remember that we hated when you were mad. You’re a scary broad when you’re mad.” she said.

“Scary? Scary how? Did you think I’d ever hit you, or hurt you in any way, or take my love away from you? I mean, how was I scary?”

“No, nothing like that. We just didn’t like when you were mad, so we tried not to do things to make you mad.”

Well, duh. And hallelujah, by the way, because apparently my evil method worked. It’s not necessarily a bad thing for kids to have a small, healthy amount of fear of their parents, in my opinion. My grown kids are both responsible, honest, hard working young adults, who I am very close to, and immensely proud of. And neither of them are in therapy over me….that I know of.

So maybe I did okay, and maybe I am a good mom who gets mad sometimes when her kids are out of control. And maybe the tons of love and happy times we share outweigh the terrible, regretful moments…and maybe they’ll never remember any of it really except for the feeling they had of being loved and safe.

My daughter walks out of the room and I follow her.

“So, how about when we rented the circus for your fourth birthday, do you remember that? Oh how you loved the flying trapeze. And we brought the baby elephant home…and he was your very own pet….”

Wait a minute, she said. I do remember something…

Really, what is it?

I remember that you always exaggerate.

← Prev: Stepping into the Unknown Next: Awake →