My Sideways Anniversary in Wine Country.

This week marks our 23rd anniversary (25 years together). Since Troy had a gig with Wilson Phillips in the Santa Ynez wine valley (where the movie Sideways was shot), we decided I’d tag along and make a mini-vacay out of it. We were to leave early Wednesday morning, but Tuesday night Evan developed a fever. After a bit of scrambling, and almost canceling the trip, thankfully our friends and our son Taylor stepped up to cover so we could go- and Evan’s fever miraculously disappeared.
From the moment we got to Santa Ynez, every morsel of food we put in our mouths was eye-rolling delicious…every wine we tasted was the best we’d ever had. I felt like Albert Brooks in Defending Your Life. 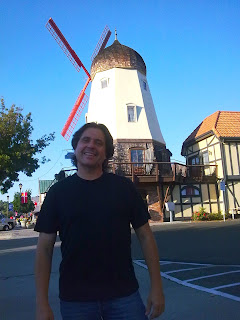 We stayed at the beautiful Hotel Corque in Solvang- a quaint little Danish town in the mountains above Santa Barbara. The next morning, we had the best Danish pancakes we’d ever tasted at Paula’s Pancakes, took a morning Jacuzzi, then spent the afternoon wine-tasting in Los Olivos, where we filled our senses sampling Danish cheeses, locally grown olives, organic local fruits and the most incredible wines we’d ever tasted (some of them over $100 a bottle)  ….I was in Heaven.
The Wilson Phillips gig Thursday night was fantastic. Several thousand people filled the venue. I was seated between Chynna’s hubby, Billy Baldwin, and Owen Elliott- Cass Elliott’s daughter. (I was ONE DEGREE OF SEPERATION away from Alec Baldwin, people. ONE DEGREE) During the Mama’s and Papa’s song “Dedicated”, Owen got up and sang her mother’s part and from the moment she opened her mouth, it was as if Mama Cass was alive again. Everyone had the chills. It was pretty special to see Chynna and Owen, daughters of the Mamas and Papas, singing their parents songs with Carnie and Wendy, daughters of the Beach Boys. The audience went nuts. 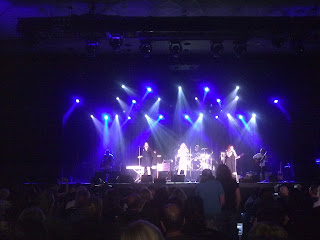 I was having the time of my life, dancing, cheering. And then suddenly, out of nowhere, I was woozy. I hadn’t had more than a glass of wine all day, but I felt lightheaded and nauseous. I headed for the exit to get some air, but before I could get out of the arena, I flat out fainted. The last thing I heard was the audience gasp. The next thing I knew the ushers were picking me up off the floor, my knees were bloody, and a team of EMT’s was whisking me away to a medical room in the casino, where I spent the rest of the show. It was one of the most bizarre things that’s ever happened to me and I still have no idea why it did. I mean it was a good show and all but…
Billy Baldwin was hosting a private party for the band and friends after the show (at a very swanky restaurant), and I was so bummed to miss it. Troy rushed me back to the hotel where I fell into a comatose 10-hour sleep. Anyhoo, I woke the next day feeling completely like my old self, so off to wine country we went!
We just had to stop at the vineyard where the movie Sideways was shot, where we bought several bottles and YES, we did drink Merlot! While there, we were talking and joking with another couple, and lo and behold we find out the guy is Rex Smith- teen pop idol of the 70s. We had a great time swapping music biz stories with Rex and his wife Tracy, and drinking MERLOT, amongst other things. Troy and Rex talked about starting their own radio show, called “Rex and Dex in the Morning”. Whaddya think?
After another gorgeous sunny day eating and drinking in wine country, we headed home, spotting a herd of about thirty deer on the side of the highway, California condors circling overhead. Then as the 101 led us along the Pacific Ocean, we saw Pacific bottlenose dolphins breaching and playing in the waves.

All in all a pretty wild and wacky journey- and just like our marriage-  a few miracles, kismet moments and a little drama and mystery thrown in for good measure. Never a dull moment around here, I tell ya. I love my life with Troy- all 25 years of it. It’s been a rollercoaster ride and I couldn’t imagine it any other way. And at least there’s been Merlot.

And I’ll leave you all with this…dedicated to my hubby. I couldn’t say it any better so I’ll hand this one over to Rex Smith. Rex- take it awaaaayyyy:
← Prev: Stitchy, the LA Times and the painful lesson learned. Next: The Book in my Hands... →

Troy and ChynnaAs many of you know, my husband Troy has been in the band Wilson Phillips for about 6 years, playing...

Love is a Risky Business

Love is a risky business. If you’ve ever opened your heart to another person, chances are you’ve been hurt. I know...

Aging is NOT for sissies

While I was in Pennsylvania, Amy and I went out for a nice dinner after a productive day of work. We were all dolled...