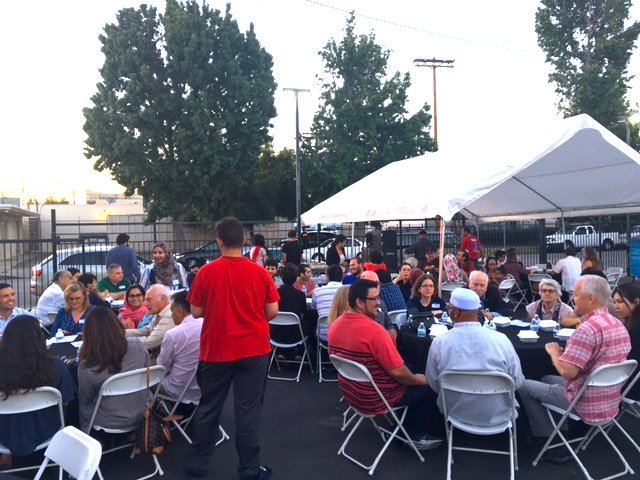 Last week, my eleven-year old son Evan confided in me that he’s been having some fears about ISIS, because of all that he’s seen on the news, and heard from friends at school. He told me that a few days before, a delivery man wearing a turban came to our front door to deliver a package and he was afraid that it might be ISIS with a bomb.

I realized that this was a pivotal moment for him, so I stopped what I was doing and we had a long talk. I told him that the delivery man was most likely a Sikh, first of all, and Sikhs are not affiliated with ISIS. Second, I told him that Muslims make up 21% of the world’s population, and just as the KKK do not represent Christianity, the violent people of ISIS do not represent the religion of Islam, and are only a tiny fraction of a percentage of Muslims. I also told him that in 2015, toddlers handling their parents guns killed more people in America than terrorists did, so the probability of him running into a terrorist are, again, a fraction of a percentage. (He’s a math kid, so he likes this percentage stuff.)

But I realized that what might matter for him more than percentages would be to have a positive experience with the muslim community. So I reached out to my friend Virginia Classick, the inter-faith queen of the gun violence prevention movement, and asked for her help. She suggested that I attend an inter-faith Ramadan dinner at my local mosque.
Evan was so nervous on the way there. “How long will it be?” “What If I’m dressed wrong?” “What if I’m the only white kid, and everyone thinks I’m weird?” “What if I don’t like the food? Do I have to eat it?”

When we arrived, we were warmly welcomed, and within minutes, Evan ran off with a pack of kids to the children’s classrooms upstairs, where they played together for hours. It turns out, one of the kids, Raif, is a classmate of Evan’s. Now they are friends.
The highlight of the evening for me, aside from the amazing food (which Evan happily ate), was when we were all welcomed into the mosque for evening prayers. I sat on the floor in the mosque next to Muslims, Christians, Jews, and Sikhs. And as the plaintive song of prayer filled the room, and the worshippers bowed and knelt, we could hear the rumble of our children’s footsteps upstairs, and their laughter as they chased each other down the halls.

The Imam pointed out that though the Arabic is the language of their prayers, the congregation at their mosque were people who spoke many different languages and were from very different cultures. In the front row were congregants from India, Iran, Kenya, Sri Lanka, Bangladesh, Indonesia and others. The overwhelming takeaway from the evening was community, unity, love and service. 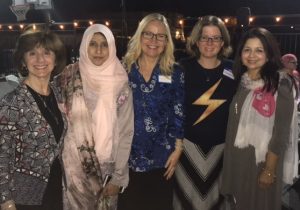 Evan is not the only one who benefitted from this evening. I, too, made many new friends. Farha, Ashia, Namia, RevFelicia Parazaider from the Love Revolution in Berkeley, Stephanie from the Vineyard Christian Church, and I even ran into a few old friends there: my activist friend Spike Dolomite Ward, and long-time friend Cantor Mike Stein. Standing next to me in the photo (in the pretty pink jihab) is my new friend Farha. She is originally from India. We talked about mostly mom stuff: our kids schools, the best local programs, the winning academic decathlon program at the local high school that her son had participated in (he is now at UCLA), and the challenges of middle school. We also talked about the misperceptions being spread about “Sharia Law.” Farha reminded me that amongst the first of Sharia laws are prayer, charitable giving, and fasting as reminder of what we are grateful for (sound like any other religion you know?). Everyone I spoke to from the Mosque warmly embraced and welcomed us, and invited us to come back, anytime.

When I finally rounded Evan up to leave at about 10PM, he was happily lounging with his new pals playing Super Mario Brothers in one of the children’s classrooms. As we left, he said, “That was really fun. I’m so glad we came!”

So am I.
Mission accomplished.

← Prev: Letter to My Teenage Self Next: Why I Still Have Hope for America →