Look Me In The Eye 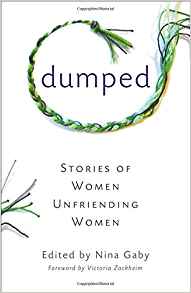 This week I’ve been reading my friend Nina Gaby’s book “Dumped: Stories of Women Unfriending Women.” I was not surprised to read that many of these breakups of friendships had taken place through emails and texts. Over the years, I’ve had a couple friends “dump” me this way, and am pretty sure that had we talked face to face, the friendship would have survived. But that was their choice, not mine.

Recently, someone lashed out at me on facebook over a certain politicized issue, criticizing my lifestyle and career choices. This was over an extreme misinterpretation of something I had posted. The greatest shock was that it was from a sweet, mild-mannered person I’ve known for years who has never before posted anything on my facebook page. I can say with 99% certainty that this person would have never looked me in the eye and said these things to me.
This is what bothers me about our new technological way of connecting with others. It isn’t real. It isn’t human. Texting, social media and email are all great ways to transmit information about work, events, politics, etc…but they are terrible ways to handle emotion.
When we are texting, emailing, posting comment, we “transmit” what we want to say without “receiving” – seeing or hearing the other person’s reaction. It’s a convenient way of unloading on someone else without having to see the hurt in their eyes, the shock on their face. This is why cyber-bullying has become rampant, and it’s not just teens who are doing it.
A few years ago someone ended a friendship with me through email with a 3500-word manifesto. I can guarantee she would never have stood in front of me and uttered those 3500 words (the majority of which had absolutely nothing to do with me) and if she had, she would have looked pretty crazy. After the shock wore off, I eventually realized this was about the toxic anger that had been building in her heart, and email made it easy for her to use me as target practice. True friendship requires the courage to sit down face to face and talk things through with respect and patience. Friends don’t fire off hurtful missives at one another and walk away.
In the years following the fire, when Troy and I were suffering with depression, we fought a lot. Our therapist taught us something invaluable that really turned everything around. “Look each other in the eyes,” he said, “because then you see who you’re really talking to, not the monster you’ve created in your head.” Another tool was to touch hands, to feel the energy of the person, to remember that you love that person. It is very powerful.
So this is my rule with technology: if I can’t look someone square in the eye and say what’s running through my mind, I’m not texting it, emailing it, commenting on it, tweeting it. Period.
As for the facebook friend, there was an apology, and an admitted misinterpretation of what I’d posted. But still, the words were said, the proverbial bullet can’t be put back in the gun. Trust has been broken and I’ll always have those words in the back of my mind.
How different would our world be if we all had the courage to look each other in the eyes?
← Prev: Random Acts of Kindness Week Next: May God Hold You in the Palm of His Hand →

You Gotta Have Girlfriends

I just had the pleasure (and I truly mean pleasure) of reading a pre-publication copy of  Suzanne Braun Levine's...

In Memory of Randy

This was our gang, a rag-tag group of rowdy kids. That’s me, the little squirt kneeling in the front row, and that’s...