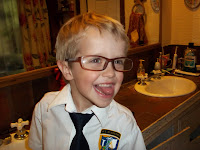 Evan in Daddy’s glasses
Today I’m giving my blog over to a very special guest – Evan.
You’d have to know my kid, with all his quirks and uniqueness, to understand how a five year old just randomly drops poems like this on my desk.
Popping into our lives at mid-life, he is our very unexpected gift. At one-year old, before he could even speak in sentences, he was obsessed with Maya Angelou and would drag her books around the house like a security blanket. At one and a half, he was reciting the alphabet, backwards. He’s been reading since he was two. By the time he was three he had memorized all the countries of the world- in alphabetical order, which he liked to recite while jumping on a trampoline. At four he was fascinated with the Japanese and Korean alphabet, which he taught himself by searching them out on You Tube.
At five, he is interested in the inner workings of the human body, and has a penchant for poetry. He wrote me a book for my birthday- illustrated it too. And of course he came up with a nom de plume – Shane Deckwen. At this rate, he will most likely get an agent before I do.
Anyhow, here is a poem he wrote me last night. I have transcribed it exactly as he wrote it, misspellings, capitalizations etc…
Dim the lights, put on a beret and snap your fingers….Here comes Little Jack.
MOMMY
2 A.M. Timer
CHIT CHAT
FURIOUS CAMELSUIT
Basket Full of Candy
You know
Like some
Other
People Don’t
Like each other
1 of them
has been
ROTTEN CHICEN
ROST BEAST
– EVAN
I can’t get over “Furious Camelsuit”. What a brilliant name for a band – or a book of short stories…probably his, when he gets published, which will most likely be when he’s….oh about Seven.
Here is Evan at three years old reciting the countries of Africa on his trampoline.
http://www.youtube.com/user/TroyDexterguitar#p/u/3/QMe-NbH6s8U
← Prev: The Lesson Next: Your last day on Earth →