I Had a Crazy-Beautiful Dream….

I saw many people walking over a green grassy hill, coming toward me. Just a few at first, and then there were hundreds. They were all colors, all faiths. They gathered together and began to speak of peace. They were going to change the world, and end violence, and stand up for children. There were warriors and patriots and parents, some whose children were taken from them, but these parents had faith. They knew their children were angels in heaven, and for a moment I swore I could see their wings shimmering above us.
Faith leaders began to appear one by one. Muslim, Christian, Jewish…wearing colorful robes and yarmulkes and taqiyah prayer hats.

They were both women and men and this made me smile. They laughed and talked and embraced each other like great friends. They spoke to us and said that together we would usher in peace and end the culture of violence, and we believed them.

Then, because dreams are crazy and can take any turn they want, there was a superhero, and beautiful TV star standing in the crowd, holding a candle and radiating joy, and then my childhood idols Jackson Browne and Rosemary Butler were suddenly there singing, and all of us sat like children on the grass, listening to their songs of hope.
And through it all I could hear bells ringing. Twenty six bells, ringing and ringing and echoing across the country, and that’s when I realized that there weren’t just hundreds of us, there were thousands and maybe millions all over America, ringing the bells and lifting our voices together in hope – and then a choir began to sing, “Go tell it on the mountain that healing is everywhere.”
At the end of my dream, a beautiful woman wearing a yarmulke stood before us and spoke of a new world that we would co-create – all of us together. We looked up and we believed her. She told us all to come close and we did. She told us all to hold hands, and we did. And then we began to sing together. Hundreds of people of all races. Reverends, Rabbis, Muslims, Buddhists, Jackson Browne, the superhero and the beautiful TV star, all holding hands and singing together a song we had never heard before and yet somehow we knew the words, as though we’d always known, “I will be a sanctuary… I will be a sanctuary…”
And the best part of this dream was that when I woke up Sunday morning, after blinking my eyes a few times, I realized…it wasn’t a dream.
It actually happened.

That night there was a beautiful circle around the moon, and I knew the peace we spoke of would become truth. I drifted into sleep again, knowing I would have many more crazy-beautiful dreams.

* On 12/14/13, the one-year anniversary of the Sandy Hook tragedy, I worked with my allies in gun violence prevention to produce the REMEMBER. RECOMMIT event at the Federal Building in Los Angeles. There were over 70 similar events all over the country. 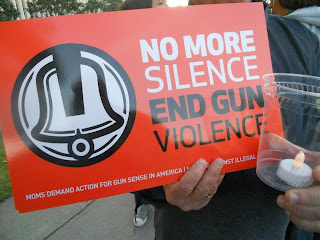 *** Thank you to Erin Doyle,  Debi Champ  and Mark Noad for above photos
← Prev: You'll Find What You're Looking For Next: 2013- My Greatest Teacher →

I know you’re overwhelmed. Bad news is screaming at you every time you turn on the TV or radio. The gun violence...

When The Police are Outgunned, No One Is Safe

Sergeant Loran Butch Baker, and Detective Elizabeth Butler  On February 26th, 2013, there was yet another...