It’s the year of The Rabbit! Anyone feel like cuddling? According to the article in the New York Times today, the year of the Rabbit is associated with tranquility. I’ve never been familiar with Chinese astrology but in the wake of 2010, I say… BRING IT!
After last year, I’m ready to believe in anything. ANYTHING. For Troy and I it was filled with jaw-dropping bad luck; restraining orders, lawsuits, betrayal, death, and outrageous home disasters. For our close friends, 2010 brought death, divorce, health issues, and five friends lost their houses. FIVE. My Japanese daughter-in-law told me that 2010 was the year of the TIGER. Yeah, that makes sense. It was mean, ferocious and downright predatory. All I can say is…Year of the Tiger, don’t let the screen door hit ya in the ass on your way out.
Crisis brings out faith in people, and also superstition. Oh sure, it’s easy to scoff at superstition when your life is running all hunky dorey. But when you had a year like many of us, you start to wonder…did I break a mirror? Is there a curse on me? Do I need to call an exorcist?
Seriously. A lady with a black cat moved in down the street and I swear to you, every time I drove home that cat would dart across the road. One time, I saw it sauntering along as I rounded the corner toward home….and the race was on. This time I was determined to pass him before he could cross me. We made eye contact. Not this time, sucka, I said under my breath as I accelerated but sure enough, he darted right in front of my car causing me to screech to a halt. Cursed yet again! Or not.
At this point, my mind is open to any and all possibilities. Chinese Astrology? Sure, why not. Year of the Rabbit sounds soft and cuddly. It’s also supposed to be prosperous. Ooooh that makes me feel really warm and fuzzy. And, I’ve just discovered, at forty-seven years old, that I am a Rabbit- who knew? The last time it was “my” year was 1999. Now that was an excellent year! We bought our dream house, we renewed our vows on our tenth wedding anniversary, we had some wonderful vacations. Happy, happy, happy. That means this is going to be one lucky year full of possibilities and new beginnings. Deal me in!
Is all this stuff true? Who cares! It makes me hopeful and optimistic. Oh and by the way, recently I got a better look at that black cat, and it turns out he has four white feet. I’m no expert in superstition, but I think the white feet cancel out the bad luck thing. So it’s all good! Yay!
Aha! I finally have an explanation for my obsession with wearing Rabbit costumes. 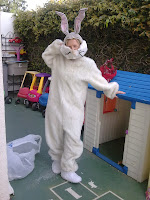 ← Prev: The Book-A-Saurus Next: My Mid-life Resume →

A New Year, A New Beginning

For the past few years on New Year's Eve, I couldn't wait for the year to be over. They were years of struggle and...

How To Survive Being Fired

Author Wayne Dyer recently told a story about doing an interview at a radio station where a huge layoff had just taken...

There’s a saying that however you spend New Year’s Eve will set the tone for the rest of the year. If that’s true, I’m...