Good News- the world is NOT ending! 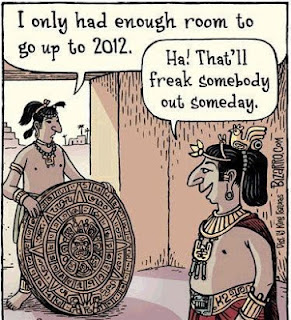 Ever since the beginning of time, man has been predicting our doom and the imminent end of the world. The prophecies and the prophets have come and gone throughout the ages, and still…nothin’. I’m not an anthropologist but as a self-proclaimed armchair psychiatrist, I’d guess it has to do with fear of our own individual mortality, projected onto the entire world – If I’m goin’ down, you’re all goin’ down with me!

I’ve written in previous years about other “End of the World” proclamations that never happened. (See: Chicken Little Bought a Billboard  and It’s the End of the World as We Know It- Again )
However, in spite of these numerous claims of certain death throughout history, the Earth continues to turn, and we are here to create more seasons of Jersey Shore and other such great advancements in humanity.

The world is not ending on December 21st- no matter what the Mayan calender rumors say. For one thing, that’s my niece Carly’s birthday. Also, I’m going to Costa Rica in June, so the world can’t end before that. But if you don’t believe me, believe the scientists. Griffith Observatory explains it best – how the Mayan calendar myth came to be, and why the rumor is hogwash. This is from their website:

The Maya calendar is not spooling up the thread of time. It is coming to the end of a particular cycle in an unending sequence of cycles. According to the rules of the Maya calendar system, a primary interval, Baktun 13, for all practical purposes ends on the winter solstice, 2012. Although pseudoscientific claims have linked this calendrical curiosity to a Maya prophecy of the end of time, there is no evidence for ancient Maya belief in the world’s end in 2012 or even in any unusual significance to the cycle’s completion.

The Maya calendar relied on multiple cycles of time. In Maya tradition, these cycles of time run far into the future, and there are ancient Maya hieroglyphic inscriptions that project time into the future well beyond 21 December 2012. At the end of Baktun 13 (a period of 144,000 days or 394 years), a new baktun will begin. There is no Baktun-13 end of time. The notion of a Baktun-13 transformational end of time is modern. It originated in Mexico Mystique, a book published in 1975 by an American writer, Frank Waters, who made computational errors.

Read more about it at the Griffith Observatory website: THE WORLD IS NOT ENDING. And do us all a favor- spread the word. Let’s eradicate this silliness so we can all get on with the business of enjoying our dysfunctional family holidays.

* Looking for something positive to do on 12/21/12? Join with souls all over the world and participate in a worldwide 3 minute meditation for peace. Details here: www.onebillionoms.com

← Prev: How to Have Happy Holidays Without Money. Next: Tiny Miracles →

Have you seen the billboards? The world is ending on May 21st, 2011. Seems the Mayans and Ashton Kutcher got it wrong....

Last night I woke at 3 am to worry. It’s my job. I do it for my family so they don’t have to, and I usually punch the...

It’s the End of the World As We Know It….again.

Wow. I just read an article in which Ashton Kutcher was interviewed about his rigorous fitness training regime. He...