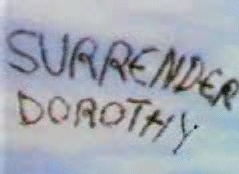 When the going gets tough, the tough get going. Right? But some say when every door is slamming in your face, life is telling you you’re on the wrong path. Some say when life isn’t working no matter how hard you try, it’s time to surrender – let go and let God. And still some say persistence is the key- Never give up!
So which is it, people? And when do you know?
Because yes, my children are healthy and my marriage is strong, thank you, thank you thank you God. Or Life or Universe or Fate or Glenn Beck or whoever it is that’s controlling the Universe. (Please, dear readers, know that the Glenn Beck reference is sarcasm…my lame attempt to insert a joke into an unfunny circumstance.) But so much of my life right now is a freekin’ mess, and I can’t figure out how I got here. People I love have let me down. We’ve been hit so hard with financial disasters, one after the other, then Troy’s employer died. We’re still dealing with the crazy neighbors with the attacking dogs, court, and all that crap.
My heart is in the right place. That’s all I know for sure. I’m doing my very best to live an authentic life, to be kind, to love my children, my husband, my friends….I want to believe in some protective God looking out for us, but the loony tunes carrying the banner for religions all over this world have ruined it for me.
So wtf? Why is life such a mess sometimes?
When is it time to surrender – or fight – for your dreams?

I know so many of you are fighting battles of your own this year. You’ve shared your stories with me, and for that I feel priviliged. So share with me again, if you would. Share with me how you know…when to surrender, and when to hold on tight?

← Prev: Everyday Miracles Next: My Cup Runneth Over →

The Best Days of Your Life

The first moment reuniting with Ayumu at the airportToday is May 18th. It's early morning and my grandson Ayumu is at...

“Oh Me of Little Faith”

As many of you know, I’ve been on a daily practice of meditation and prayer, and my life has begun to shift. (If you...

Throw Love at It

My friend Mary gives the best advice. Over a year ago, I sat in her front yard with tears in my eyes, and told her...