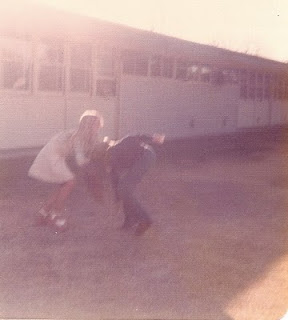 My very first memory of life was seeing my mother being beaten by my stepfather. I was three years old, helpless to stop it. To this day my mother has health issues related to those beatings, and we all bear the emotional scars.
I was a good-natured child with a sunny disposition. I was eager to please, and would do anything I could to make my mother smile; sing, dance, tell jokes. I was also a little shrimp – the smallest kid in my class throughout grammar school, and sometimes I got picked on. But one day when I was about 10 years old, a boy tried to bully me, and I got angry, really angry. That was the day I started to fight. I was not going to end up helpless on the ground like my mother.
I got my ass kicked now and then, but I went down swinging. The above photo is of me, twelve years old, in a fight, (the only time I got in a fight with a girl). I’ve always been ashamed of this time in my life, this time when I was angry and tough and cynical. I never told anyone about it, because it’s not who I am today. I always felt I should apologize for having that in me – I’m a peaceful person who wants to be a force for good in the world. But it was that anger and ability to fight that helped me survive. So when an old friend turned up with this photo, I had to claim it. Yes, that was me. Angry little girl, trying not to end up on the same road her mother travelled. (and seriously, I had to give myself props for fighting in heels.)
This fight phase only lasted a few years. By the time I turned thirteen I had learned how to defend myself with words.
I hate to fight. I want to be the little girl I once was, before all the ugliness became reality. My whole purpose on this Earth is to heal myself, and to in turn be a healing and peaceful person for those who come in contact with me. But there are times when you have to stand your ground, and it’s not pretty (even in great shoes).
The wind is blowing today. I hate the wind, it creeps me out, and even worse, it does horrible things to my hair. The wind has always reminded me that change is coming, and change is uncomfortable, sometimes painful.
I’m in this awful fight phase now with my crazy violent neighbors, fighting to protect my children and the neighbors from their vicious pitbulls. To make matters ten times worse, some of the people I love most are behaving in hurtful ways at a time when I am fragile and vulnerable. So I am typing, typing, typing, hoping that some amazing epiphany is going to flow out and all this ugliness will make sense.
Nothing so far.
Type, type, type….still nothing.
Right now, life just sucks, and there is no apparent reason for it. Guess I could just put my dukes up, and put on some strappy heels.
Or I could pray for peace and healing ….
It just may be that both are in order.

When I started the seventh grade all the other kids seemed to tower over me in the halls. The girls had women’s...

What a Wonderful World

(Julie, Joel Burns and me backstage at the Ellen show) I had an incredible experience yesterday - living proof that...

For Boys and Girls Standing on Ledges

(Dedicated to my brother Ted. I love you!) This month we’ve lost too many young people to suicide. They have...