Do You Believe in Angels? 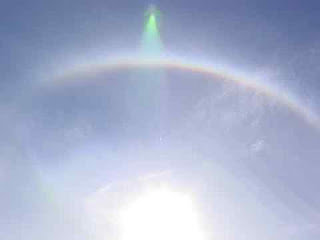 Last week, I was upstairs writing, and Troy was in the recording studio doing a session with a French horn player. At the end of the session, Troy came upstairs and said, “The French horn player really wants to say hello to you before she leaves. She said she remembers you from the last time she did a session here, eight years ago, and something about a rainbow?”
I had no idea what he was talking about but I went downstairs to say hi to Stephanie, the French horn player. We had a friendly hello and a handshake, and then she said she had a crazy story to tell me.
“Do you remember eight years ago, I was doing a session here?” I smiled politely but honesty I didn’t really remember. She continued, “I had never worked with any of you before, so you didn’t know me, and you didn’t know my husband had recently passed away.”
“Oh, I’m so sorry,” I touched her arm.
She nodded, “ It was a rough time for me. A lot of crying and calling girlfriends at three am. Anyway, at the end of the session as all of us musicians were packing up to leave, Mike (the client whose album it was) ran outside after me and asked if I’d come back to play on one more song.”
Mike said, “It’s a song I wrote for my daughter, who shares your name, Stephanie. We don’t have any charts or anything written out…I wasn’t planning on any horns on this song, but maybe you can just listen to the song and see if you can come up with a part?”
Stephanie agreed, came inside and put on the headphones, and that’s when she heard our friend Tollak’s beautiful voice singing, “Stephanie, I will never let you go, Stephanie I love you I love you I love you….Remember I’m here, right by your side, reach out your hand and touch the sky…”
Suddenly she was covered in chills. She felt sure husband had sent her a message through this song,but didn’t know if she was just imagining it. She was hoping for a sign.
“Just then,” she said to me, “You burst through the studio door and said, ‘I’m sorry to interrupt you guys, but there’s a double rainbow in the sky. You have to come and see it!’”
Stephanie was blown away. She stumbled outside, stunned, and what she saw was like a scene from a movie. There I stood with my neighbors at the edge of a meadow, little kids and golden retrievers running around, everyone gathered together to witness the rainbow.
Stephanie said that day changed her, for she knew at that moment her husband’s love for her lived on.
I had barely remembered that day and the double rainbow. I had no idea when I burst into the studio interrupting the session (which I never, ever do, by the way) that I had delivered a message to a woman from her deceased husband.
It made me wonder, how many of us have delivered life-altering messages to strangers and never had any idea? The world is a huge and mysterious place, full of wonder, and mystery, and, I believe, angels walking amongst us.

The story gets even deeper — Mike, who wrote the entire album,  was a Wall Street guy who had just left the Twin Towers minutes before the first plane hit on 9/11. He knew then that life is short, that he wouldn’t die with his music still  in him.

Often we think that life is just chaos. We sometimes doubt the existence of God when the world seems to be spinning out of control. But if we slow down enough to notice, to listen, there are signs everywhere. A white feather on your pillow. A favorite song that comes on the radio right when you’re thinking of your loved one, a butterfly that dances persistently in front of you, or how about this: 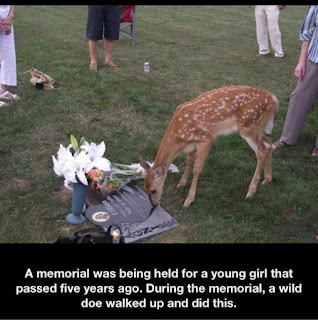 The message of this story – Keep your eyes and ears open. Be aware when a butterfly lands in front of you, or a hawk soars in circles overhead and always, always stop to notice a rainbow.
If you have an angel story, will you please share it here?

Here are a few more of my miracle stories about God and angels:
TINY MIRACLES
OH ME OF LITTLE FAITH

← Prev: No one can break your heart like a woman... Next: The Questions of a Child →

"Faith is believing in something even when common sense tells you not to." - Maureen O'Hara,  Miracle...

“A miracle is a shift in perception.” – Marianne Williamson In my last post, I talked about the scientific fact that...