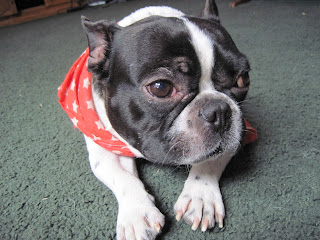 We have just returned from yet another shocker of a day in court, fighting for the right to keep our dog.
For anyone who is new to this story, all the details are HERE.
For those who’ve been following all along, you know that In September the plaintiff’s attorney dropped him. He appeared before the judge to be officially “released”, claiming his client wouldn’t return his calls nor pay him.
Our attorney, Jill Ryther, then called and emailed the plaintiff numerous times and got no response. It seemed clear to everyone that since “winning” custody of Stitch five months ago, but “losing” all monetary motions against us, the plaintiff had lost interest.
Monday we were called to court by the judge to state why nothing had been resolved on either side. The plaintiff did not show up, and unfortunately, neither did the judge. We were rescheduled to today. We showed up on time. Our case was the first call at 8:30 am. No plaintiff in sight. And then as our attorney is presenting to the judge, the clerk interrupts, “The plaintiff’s attorney called and is running late. He says he’ll be here at nine.”
“Oh okay,” says the judge, “we’ll reconvene at nine.”
WHAT????
This was wrong on so many levels…First of all, what attorney? And why are attorneys permitted to waste the court’s time by showing up late?

Sure enough at 9 am, the attorney who had asked to be released from the case, (“Fox” is his name, by the way), strolls in half an hour late. For the past two years, he has shown up late to every hearing, been a no-show at three court appointed dates, and most recently dropped his client. And yet, he receives no penalty, not even an admonishment by the court.

The court has ordered the plaintiff to appear in court several times and he has no-showed, and yet, nothing happens. We keep waiting for the judge to say this is ridiculous, and throw the whole thing out. But he doesn’t.

Fox says his client is not able to be there because he is “receiving medical treatment” (I instantly remember why the original owner of the dog wasn’t at trial- he too was “receiving medical treatment” in “rehab”). Thankfully the judge tells Fox he can not represent the client as he was released from the case. He tells him to take a seat. Even still, as our attorney presents our side, Fox jumps up and argues against her, and the judge ALLOWS IT! ( circus music…)
I could go on and on with my frustrations about this case, but I’ll spare you and give you the results from today: Five months ago we lost legal custody of Stitch and immediately filed an appeal. Since then we have been fighting to retain custody of Stitch during the appeals process, which could take another year. Today we were granted temporary custody pending appeal. We have to pay the court $2000 in collateral to assure that we don’t run off with Stitch in the interim. And we have to pay our attorney to write a 20 page appeals brief and filing fees. Then we have to go to appeals court, some time in 2012. The whole crux of our appeal is we are trying to prove the court’s ruling was wrong-  that a family pet is not property. Stitch is a sentient being with needs and rights, and his well-being should be first consideration. A bicycle is property. You can leave a bicycle in a hot car without any repercussions. You can not do that with a dog. See that, courts? NOT THE SAME THING! We will be submitting the Save Stitch petition with our appeals brief, so if you haven’t signed it yet, please do! And spread the word! (it’s at the top right corner of this page, or on our website)
AND- just in time for the Holidays….the Stitch store is re-opening. Wouldn’t you love to buy Holiday gifts from Stitch this year? Every penny you spend goes to Stitch’s legal defense fund! Help us fight this stupid law and make the world a safer place for animals!
Please visit our website where you can sign the petition, shop at our Save Stitch Store, read the whole background story, plus blogs and newspaper articles written about our case.
SaveStitch.webs.com
Thank you to everyone who has supported us through this whole ordeal. This is a fight we have taken on together. There is no way Troy and I would still be standing strong without all of you behind us. THANK YOU!
← Prev: Calm in the Center of the Storm Next: All Because of a Little Dog Named Stitch →