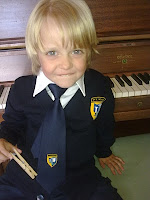 Six years ago I had the worst birthday ever. Worst. It was December 2004. I was estranged from both of my parents. My mother had exiled me for speaking out against something awful that had happened in our family. My father was struggling with addiction again, and had let our relationship go. Neither of my parents called or acknowledged my birthday. In fact not one person in my extended family acknowledged it.
As if being estranged from my parents wasn’t bad enough, the nonprofit foundation I’d co-founded was in the middle of a hostile takeover by some ambitious board members. Power and greed overcame altruism. The musical instruments that had been donated to my students (kids in foster care) were taken away. The grant money was pulled from my arts programs so they could use it for advertising and self promotion. They were attempting to oust me and run the organization themselves. It was the year of the Grinch, for sure.
On top of that, my daughter was away at college, and I was missing her. My son was a teenager, busy with his own life and his rock band. All I wanted for my birthday was a couple of my close friends over for dinner. But even that didn’t work out. Two of them only stopped by briefly on their way to another event, one got drunk to the point of puking, and the other’s car broke down on the side of the road. So while my husband went to rescue her, I went to bed alone. Happy birthday to me….
The day after my birthday, I crawled into my bed like a wounded animal and cried a year’s worth of tears. I went through an entire box of Kleenex. But I did something else too. For the holidays, I had made a mix CD of songs about angels. I played this CD all day while I cried. And I prayed – not just any prayer- I remember this prayer specifically because I chanted it over and over for hours.
Please send me an angel to help me believe in the goodness of people again.
Over and over and over…crying, praying, crying some more. I spent the whole day doing this.
Often times, miracles are already budding just beneath the surface of your life, but you can’t yet feel it. Never in a million years did I imagine what would come next, and it wasn’t until late January that I found out. That Christmas morning, completely oblivious, I already had the gift nestled inside me. Just weeks after I sent that prayer out into space, I had become pregnant at forty-one years old (and using birth control).
After the initial shock (and boy oh boy…what a SHOCK) we figured out it must have happened right before Christmas, maybe even on Christmas Eve. I knew then my prayers (or my intent) had been heard and answered. Certainly not in the way I expected – but rarely are prayers answered the way we expect.
On the September night I went into labor, there was a freak electrical storm. Thunder and lightning, unseasonal for California, announced Evan’s entrance into the world. I always tell him he rode into town on a lightning bolt.
Every birthday since, I’ve had this little angel-boy to spend my day with, running around the house, raising a ruckus like he always does, testing my patience, teaching me to love on the deepest level.
All three of my children were miracles that I hoped and prayed for. Each of them came to me in a different miraculous way, and each has taught me so much about the true nature of love.
As I was writing this, my son Evan, five years old, came into the room and asked what I was doing.
“I’m writing about how you – and how you came to me like a miracle.”
“What’s a miracle, mommy?”
Hmmm…had to think about how to define that to a five year old.
“It’s when…something really good happens to you right at the time you need it.”
“Oh. Like ice cream?”
“Yes honey, like ice cream.”
“Can I have ice cream after school?”
“Yes.” I smiled and held his little face in my hands.
“I love you,” he said.

And that, my friends, is the miracle.

← Prev: Living In Possibility Next: Day 6 of Miracle Week →